In view of our recent election, I wanted to re-post this excerpt from a talk I gave on September 11, 2011.

I was born in New York City. My brother is a 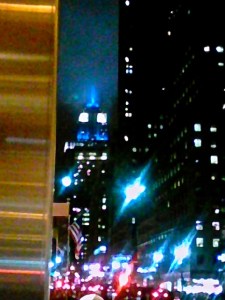 police officer there. Ten years ago today, he was heading home after working the night shift when he got the call. He watched the Twin Towers fall. It must have been horrific; I can’t imagine. When I visited New York that winter, a hundred days and nights had come and gone, and still the air smelled burned.

So the question is, how do we respond to things that happen? The President said, “You’re either with us or against us.” That sounds simple enough. But who is us? And who is them?

When his father died in the World Trade Center, Jeremy Glick was in his mid-twenties. He signed a petition, a Statement of Conscience protesting our wars on Afghanistan and Iraq. After this petition appeared in The New York Times, Jeremy was attacked by Bill O’Reilly on his TV show. O’Reilly raged about how Jeremy could defend the people who had murdered his father. The young man calmly asked, “Why would I want to further brutalize and punish the people of Afghanistan? The people of Afghanistan … didn’t kill my father.”

Surely if anyone would be justified in hating, Jeremy would. But he knew the truth: us and them don’t actually exist. In Buddhism we say that all of life is interconnected, a shimmering net of interwoven strands. At each crossing of the strands lies a jewel, a being. And every jewel reflects the entire net.

Because of this interdependence, an early Buddhist text says, “In this world, hate never yet dispelled hate. Only love dispels hate. This is the law, ancient and inexhaustible.” Martin Luther King, Jr. said, “Returning hate for hate multiplies hate, adding deeper darkness to a night already devoid of stars.”

So what then must we do? The petition that Jeremy Glick and thousands of others signed read, in part:

“WE BELIEVE THAT PEOPLE OF CONSCIENCE MUST TAKE RESPONSIBILITY FOR WHAT THEIR OWN GOVERNMENTS DO–WE MUST FIRST OF ALL OPPOSE THE INJUSTICE THAT IS DONE IN OUR OWN NAME.

LET US NOT ALLOW the watching world today to despair of our silence and our failure to act. Instead, let the world hear our pledge: we will resist the machinery of war and repression and rally others to do everything possible to stop it.”

Resistance of war and repression begins with resisting the first fiction: us and them. The foundation of any real religion is reverence for life. So we are asked to love life, in all its manifestations, with all our hearts. To love it in joy, and love it no less in heartbreak. That’s the work we have to do in this world.

We do it with hope that one day we will learn the smallest of our actions has consequences beyond our imagining, and we will learn to care for these consequences, because the present gives birth to the future. We hope that people everywhere will one day come to know that many of the things we fight for, the borders and prejudices, us and them, are invented – that in reality there is no separation – everything exists together, intimately linked, a single life force expressed in infinite, breathtaking variety.

2 thoughts on “Us and Them”